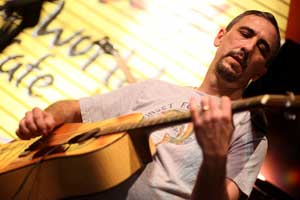 Steven James DiPersio has been a singer/songwriter since he began to play the guitar at the age of 10. Growing up in Wilmington, Massachusetts, there wasn’t much to do, so DiPersio found his way into the world of playing in bands.

He was the guitarist and one of the writers for such bands as Shiner, Giulio’s Mama, Old Jonesy and Critycal Mass and has recorded with several other musicians.

DiPersio released a solo album on iTunes called “The Storm” in 2010 and also played lead guitar on both Zak Jacobson and the Pryor Convictions albums, also on iTunes.  Recently, DiPersio has been diving into the Folk realm, and that is the act he will bring to his feature here at Rick’s Music World on Thursday, April 26.

Open Mic performer sign up starts at 6:30
The show starts at 7
Admission is $3.00 per person
More about Rick’s Open mic

Rick’s Open Mic is a community service program made possible by the generous personal commitment and donated time of our Volunteers and Staff. Admission is $3 per person, which helps fund improvements to the Open Mic Program and the Rick’s Music Scholarship Program.  The Rick’s Music Scholarship Program helps subsidize the cost of private music lessons for students with financial need.