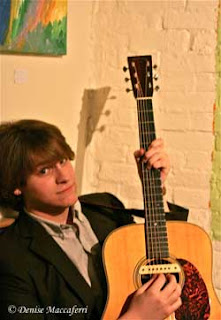 Matt Borrello invites you to take part in the making of his next CD to be recorded LIVE at this special show at Rick’s on Friday, May 11th. Prepare for a late night because Matt has lots of great entertainment planned for us!

Location:  Rick’s Music World & Cafe
421 New State Hwy
Raynham, MA
Reservations Recommended!!
Call 508-977-0200 or Reserve Tickets Online
Matt brings an immediate creative energy to any stage he lands on and he’s racking up a list of notable New England stages to add to his bio. Some day that list is going to be global and longer than a Dylan song, but we hope that the Rick’s Music stage will always feel like Matt’s home. Reserve your seats now for this very special night.

BIO:
Matt Borrello is a singer-songwriter from Southeastern Massachusetts. For five years Matt has performed regularly in the Boston/Providence area, usually as a solo acoustic act, but also as a sideman for other songwriters and as the leader of his band, the Quality Dogs. Matt’s insightful lyrics and passionate performances have earned him recognition in various New England talent showcases and songwriting contests, most notably at the Boston Folk Festival Youth Songwriting Contest.

His songs draw their structures from folk, country, blues and rock music. He is a lover of spontaneous collaborations and his songs have highly malleable arrangements. Matt writes from a personal perspective, but his songs are markedly devoid of boring self-pity. He has several protest songs and no breakup songs. Matt has opened shows for well known local and national musicians such as John Flynn, Rick Fetters, Don White, and Kevin So. He has been a part of shows at venues including Club Passim, the Somerville Armory, Rick’s Music World, Steve’s Backstage Pass, the Taunton River Folk Festival, the Union Coffeehouse and the Soule Homestead Folk Concert Series.